Currently, there are increasing environmental concerns due to the ever-increasing amounts of untreated waste containing biodegradable putrescible materials, that are disposed of by disposal onto farmland, landfill and incineration.

There are increasing problems of flooding, topsoil erosion and losses caused by urban development and intensive arable agriculture, which is losing its organic fibrous matter by wind and water erosion. 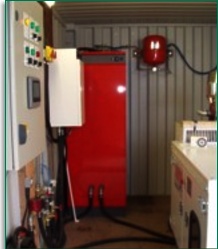 The use of recycled organic matter/fibre to farmland and forestry and the generation of energy from waste streams, especially those containing biodegradable putrescible materials, have attracted much attention over the past few decades.

Many systems based on Anaerobic Digestion (AD) and aerobic composting have been developed. The research emphasis over the past few years has been towards large-scale centralised systems, on the basis of 'economy of scale', without much regard for transport costs, disease transmission and road vehicle pollution.

Many of the systems currently on offer are complicated and expensive. However, there is a 'green' and low-cost alternative, using a simple method of Anaerobic Digestion and composting to convert solid and liquid organic wastes to energy and a composted soil conditioner/peat substitute.

Using a novel, transportable and modular anaerobic digester, which can operate at thermophilic (55 - 70°C) temperatures and above and which has been designed for local/community scale waste treatment with the minimal safe handling of the waste and a reduction of transport costs and pollution. The process is ideal for farm diversification and community recycling schemes.

A further development of the process is the use of multiple first stages operating in parallel, preventing cross contamination between feedstocks and aiding traceability of final products.

The multiple units can reduce the amount of feedstock used, controlled by the biogas yield in the later stage.

This approach makes the system modular, so that it can be used in a range of sizes and expanded if the processing demand at one site is increased.

Copyright © 2004-2022 Bioplex Ltd. All Rights reserved.
Bioplex, Portagester and Fermen8 are registered trademarks in the UK.